Start a Wiki
Final Hours is a video by 64marjo64 that is somewhat similar to a YouTube Poop, in that is uses characters and stuff, but many characters are reanimated. Basically, it is the best Flash Poop I've ever seen.

Link is wandering around the castle playing his PSP. He then notices the date on the wall calendar: December 21, 2012. This horrifies Link, and he tells King Harkinian (who's on the can, by the way). The King gets frightened, too, and he begins to tell everyone else at a huge party. They freak out, and anarchy pursues. Many characters raid stores, destroy buildings, and simply attack each other. Soon they all wander off to a cliff to see the end happening. They wait, and suddenly a huge wind blows. However, as it turns out, it's just the king farting. Homer Simpson decides to leave, followed by Brian Griffin, then Nostalgia Critic amd Spyro. Soon they all leave, and King Harkinian feels ashamed that he wasted everyone's time.

All of Luigi's forms, except Gay Luigi. 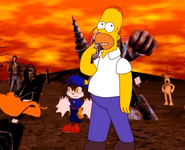 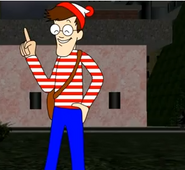 Waldo.
Add a photo to this gallery
Retrieved from "https://king-harkinian.fandom.com/wiki/Final_Hours?oldid=36508"
Community content is available under CC-BY-SA unless otherwise noted.