For other uses, see Garfield (disambiguation).

Garfield was born in 1978 in the kitchen of an Italian restaurant in Indiana and promptly drove his birthplace out of business by eating all of the food, money, cooking equipment, and customers. Luckily for Garfield, the hapless Jon Arbuckle made the worst (okay, not the worst, but definitely in the top hundred) decision of his life by adopting him instead of buying an iguana. Garfield would constantly abuse his owner and terrorize his neighborhood until, in 1995, he was inexplicably transported to 2254. He then met one of Gwonam's descendants, learned how to fly using his blanket and bed-box, and went off into outer space.

He seems to like eating and sleeping. He is also conservative, and doesn't care about world events. In fact, he isn't aware that 9/11 even happened. He usually acts like a typical cat, but sometimes he does things a cat wouldn't do, like playing games with mice or attacking mailmen. Though lazy, he has an active imagination and has produced a number of forms, including Amoeba Man, Enzio Bodoni, Roy Gato, Banana Man, and Sumo Cat, as well as the Caped, Paisley, and Hankied Avengers, though none of them survived the Form Wars.

He is a fat, orange cat who can walk on his hind legs. This is an improvement over what he used to be. Due to dangerous levels of anti-uctions in Jon's house, his appearance changed radically over the first few decades of his life. This process has created at least two distinct forms, known as Fatter Garfield and Fattest Garfield. 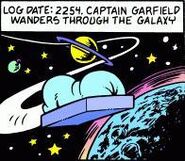 Garfield in the future.

Garfield in his drug-fighting days. 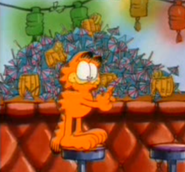 Alcoholism.
Add a photo to this gallery
Retrieved from "https://king-harkinian.fandom.com/wiki/Garfield?oldid=33860"
Community content is available under CC-BY-SA unless otherwise noted.