Harkeegee is a fusion of King Harkinian and Weegee who formed when Muigi looked at King Harkinian. He is very evil, and he fought in the Form Wars.

Like King Harkinian, Harkeegee has an orange beard, a crown, and a long robe. However, he has overalls and gloves. He also has Weegee eyes and is about seven feet tall.

He seems to be addicted to food, like Harkinian, and also likes ships and Scrubs. He also likes killing people and/or slapping people. He also really likes money for some reason. He went to Warrior College and has been in twelve mental health hospitals since 2009. 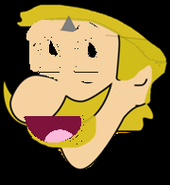 Harkalleo.
Add a photo to this gallery

Retrieved from "https://king-harkinian.fandom.com/wiki/Harkeegee?oldid=35728"
Community content is available under CC-BY-SA unless otherwise noted.