Alma Harkinian (1977–2008) is the daughter of Duke Onkled and Gana. She can often be found hanging out with Zelda, most of the time looking at herself.

Relations to Other Characters

Lady Alma and Zelda were best friends until Alma acted apathetic about Link shortly after the 1993 liberation of Gamelon, provoking Zelda into throwing Alma's mirror into a wall and breaking it. The two never spoke to each other again and would often fight each other, trying to subtly kill each other.

Lady Alma once kissed Link, much to his dislike, so he stole her canteen in revenge and went home.

Lady Alma doesn't like Duke Onkled, but she enjoys the privilege she gets from being related to him.

Finally, in 2008, Zelda killed her using smoke bombs and a Smart Sword. It is not known what Zelda's motivations for this particular attack were, but it may have had something to do with Alma saying "he was a bore anyway" when Zelda asked what happened to SwishFilmsinc. Lady Alma had a short funeral, and Duke Onkled decided to adopt a new kid. 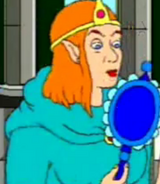 Stop looking at yourself.

Lady Alma, unamused.
Add a photo to this gallery
Retrieved from "https://king-harkinian.fandom.com/wiki/Lady_Alma?oldid=33206"
Community content is available under CC-BY-SA unless otherwise noted.