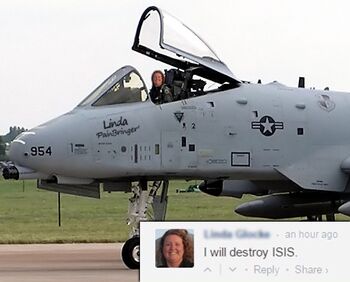 Linda Glocke is a woman who has started a one-woman war against the Islamic State of Iraq and Syria (ISIS) in November of 2015. She is fighting hard and now her very name makes ISIS cry.

No one knows when Linda Glocke was born because there was no ISIS back then so she didn't have a reason to exist. When ISIS was founded in the February of 2014. Linda's reason to exist was finally given.

In November of 2015, ISIS attacked Paris, France, it was the last straw. Furious, Linda declared war on ISIS.

Retrieved from "https://king-harkinian.fandom.com/wiki/Linda_Glocke?oldid=27090"
Community content is available under CC-BY-SA unless otherwise noted.