Start a Wiki
Malleo is an evil Mario lookalike who is Weegee's brother. He likes fire flowers and torpedos. While weaker than Weegee, he's still pretty darn powerful. Unlike his brother, he tends not to cause much destruction in Hyrule (at least not in the modern era), largely because his favorite restaurant chain, Duke Onkled's Diner, is found there. He is a co-author of Malleo Comics.

Malleo is about 15 billion years old. During his younger years, he raised his younger relativeWeegee to be EVIL just like him. He later went to the real universe to build a city called Fiyaflonia in what is now Israel. However, during the Devonian period, Malleo abandoned the city and went back home. He later contributed to the extinction of Earth's dinosaurs and personally brought about the fall of the Roman Empire. In 1992, Bowsa kidnapped him and imprisoned him in Antarctica, but Weegee defeated Bowsa and freed him. After some time, he began to plot against King Harkinian by sending Weegee to kill him.

After early plots to kill the King failed, Malleo summoned Mama Luigi (with the help of Weegee and Fortran) to kill King Harkinian, Zelda, and Link. Malleo failed again and decided to focus his efforts on killing Bowsa, but Bowser beat him to it in 2015. Annoyed at Bowser for denying him his revenge, Malleo then decided to aid the Mama Luigi Army, an enemy of Bowser's kingdom in the then-ongoing Form Wars. During the war, Malleo helped to open a route between the Weegeeverse and our universe and worked with Fari to create the fusion known as Falle.

Malleo has the ability to do many things such as: 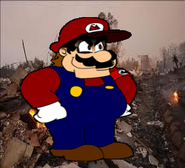 Toon Malleo 2.0
Add a photo to this gallery

Retrieved from "https://king-harkinian.fandom.com/wiki/Malleo?oldid=36343"
Community content is available under CC-BY-SA unless otherwise noted.