Mama Luigi stars in his very own video game!

Luigi's Mansion would have been much different if it starred Mama Luigi. 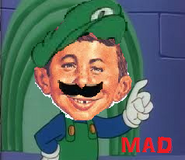 Mama Luigi after getting infected by Alfred E. Neuman's virus.

Mama Luigi even had his own movie about bedtime stories.

A rare image of Mama Luigi not wearing his hat.

This happens more often than you'd think.
Add a photo to this gallery
Retrieved from "https://king-harkinian.fandom.com/wiki/Mama_Luigi/Gallery?oldid=32869"
Community content is available under CC-BY-SA unless otherwise noted.