Bobbert Kravindish (born 1955) is a Gamelonian lawman and the mayor of Sakado. He often fights with King Harkinian and Morshu over their blatant disregard for the law, and has attempted to arrest them on many occasions. However, because he has no jurisdiction outside of Gamelon, he has never been able to prosecute the King for any of his crimes.

When Ganon attacked Gamelon in 1993, Kravindish was captured and taken to Tykogi Tower. Eventually, Zelda freed him.

Mayor Kravindish is an old, gaunt elf with a large pink nose, a feature he shares with many other Gamelonian elves. He dresses like the founding fathers of the United States, as he greatly admires the American legal system and wishes to make the Hylian legal system more like it. He also wears a powdered wig, although this is just to hide his baldness.

The Mayor is a supporter of workers' rights and unions, and when Link went on strike, he confirmed to the King that Link's actions were legal. He also seeks to illegalize things like drugs and prostitution, putting him in conflict with pretty much every other YouTube Poop character in existence.

Relations with the King

As mentioned above, Kravindish and the King have a hostile relationship, and Kravindish has imprisoned or attempted to imprison the King for countless crimes over the years, including cannibalism, drunk driving, and pirating Sony Vegas. Perhaps unsurprisingly for a YouTube Poop character, however, Kravindish is also attracted to the King, and he once attempted to persuade the King to bind him for sexual purposes.

What Mayor Kravindish may have looked like in reality. 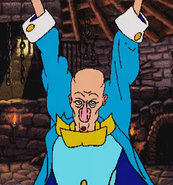 A rare look at the Mayor without his wig. 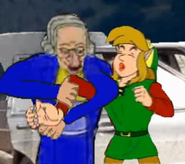 He's not particularly fond of Link, either.
Add a photo to this gallery
Retrieved from "https://king-harkinian.fandom.com/wiki/Mayor_Kravindish?oldid=36461"
Community content is available under CC-BY-SA unless otherwise noted.