Eugene Krabs (born November 30, 1942; age 72) is the proud owner of the Krusty Krab and the assassin of Barack Obama. He also crochets pictures of Dr. Robotnik.

Mr. Krabs was born November 30, 1942 in Bikini Bottom. He was ironically very poor when he was young, so he got obsessed with money. He decided to sell hamburgers to everyone. When King Harkinian bought one, he made Mister Krabs the chief dinnerman of Hyrule. He then hired SpongeBob SquarePants on below minimum-wage to make hamburgers, and Squidward Tentacles to work his cash register. He then hit Mrs. Puff with a rake, and became a maniacal moron. He was then imprisoned at Hyrule Mental Institution until the Form Wars.

I am Doctor Krabs and I'm saving lives!

Malleo and Eugene team up.

Eugene and his dollar meet Frollo. 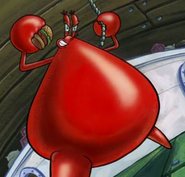 O_o
Add a photo to this gallery
Retrieved from "https://king-harkinian.fandom.com/wiki/Mr._Krabs?oldid=36172"
Community content is available under CC-BY-SA unless otherwise noted.