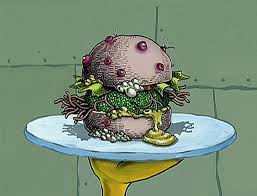 The Nasty Patty is the worst food in the world. It is unknown if it is even supposed to exist it is so horrible.

Symptoms of eating a Nasty Patty

A Nasty Patty will give many horrible side-effects when eaten.

Retrieved from "https://king-harkinian.fandom.com/wiki/Nasty_Patty?oldid=31147"
Community content is available under CC-BY-SA unless otherwise noted.