Rainbow Dash (or just "Dashie") is a tomboyish pony who is friends with Pinkie Pie. She has the power of rainbows, and can fly. She was once invited by King Harkinian to see the end of the world. However, when it didn't happen, Rainbow Dash immediately assumed King Harkinian was a total d----ebag. They never interacted again. 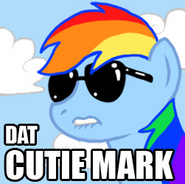 Rainbow Dash is so awesome she can even PWN Weegee. (Not always)
Add a photo to this gallery
Retrieved from "https://king-harkinian.fandom.com/wiki/Rainbow_Dash?oldid=31391"
Community content is available under CC-BY-SA unless otherwise noted.