Start a Wiki
Ryuko Matoi (2013 - 2102) was a girl from Japan who suffers from schizophrenia. She often wore a very controversial piece of clothing who she believed to be alive and speaking to her. Other than her imaginary friends (primarily her clothes), her only real friend was Mako Mankanshoku who was basically just another psychopath. Ryuko often beat people up with half of a giant scissor that she somehow managed to get.

Ryuko Matoi was born to a nutjob mother named Ragyo Kiryuin one year before the Form Wars began. Her mother believed that it's humanity's fate to become slaves to clothing, so she tried to fuse Ryuko with clothing when Ryuko was a newborn which failed and almost killed Ryuko. Ryuko's father, Isshin Matoi, realized how dangerous Ragyo was so, with Ragyo believing Ryuko to be dead, kidnapped the baby and sent her away to a boarding school far away in order to protect her. He then faked his death to protect himself, leaving his other daughter, Satsuki Kiryuin, to suffer from the evil grasp of her mother.

17 years later, Ryuko returned to the city she was sent away from after her father died and enrolled in a military academy there where she started to beat up people with evidence of her insanity becoming more and more clear every day. She befriended another insane person named Mako Mankanshoku, who quickly became Ryuko's loyal friend no matter what, mostly because Mako was a creepy stalker.

Ryuko eventually started to get entwined in her mother's nutjob delusions and vowed to stop her from ending humanity, even though Ragyo had no possible capability of ending humanity. They started to fight each other in the streets while people just walked away from the fear of being attacked by two people who were obviously mentally ill and violent. The fighting ended with things getting so bad that Ragyo killed herself but Ryuko took credit. Ryuko then believed she was falling into Earth and so she burned the clothes she was wearing.

After that, Ryuko was FINALLY committed to a mental hospital where she spent the next two years. In 2030, she was finally released in a much more stable state. While in her time in the looney bin, she found the light and became religious... as a Satanist.

Due to a traumatic past and possibly being a human guinea pig for her mother's experiments as an infant, Ryuko developed schizophrenia and a violent nature early on. She soon developed an addiction to crazy. Throughout her life, she believed several inanimate objects were alive and talking to her but the government never committed her to a mental hospital so she continued on her rampage until she killed her mother. After that, her mental illness slowly got better. By her adulthood, she was much saner but still crazy.

At first, Ryuko had a horrible relationship with the Barkleys. It all started in 2029 when she beat up and possibly killed Tommy Ray Barkley. The next day, his sister, Tina Ray Barkley met the same fate. Their transgender cousin, Michael Ray Barkley, tried to stop Ryuko but failed. Following Michael's failure, the entire Barkley family was expelled.

However, things slowly got better after Ryuko was released from a mental hospital in 2032, and in 2046, Steven Ray Barkley became Ryuko's running mate in the 2046 U.S. Presidential Election. 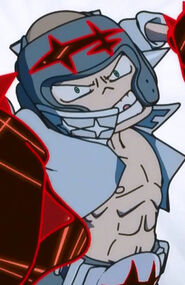 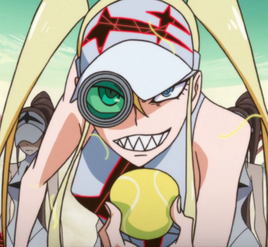 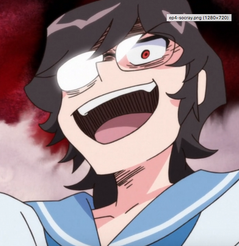 Michael Ray Barkley
Add a photo to this gallery

During her childhood, the only family Ryuko knew was Isshin Matoi, her father who she barely saw. While the two of them barely knew each other, they often. One day when she was 17, Ryuko got a note from her father asking her to visit him. She then traveled to his mansion only to find him dying, having half of a giant scissor cut into his vital organs. Isshin told Ryuko that if she finds the other half of the giant scissor, she will find his killer. Ryuko then left the mansion with the half the giant scissor just before the mansion exploded. After that, Ryuko thought she was alone but eventually found out her evil mother and that her worst enemy, Satsuki Kiryuin, is her sister. After their mother's death, Ryuko and Satsuki became friends.

Ryuko hates Wibzods ever since Wibzod VI raped her. Ever since that, she often spoke about getting rid of Wibzods and giving made up excuses like Wibzods are a threat to humanity. After being elected President, she managed to illegalize Wibzods.

Make claims to be Ryuko's best friend (and only friend). However, Ryuko is legitimately scared of her. Mako often harassed Ryuko, most of the time sexually, and got away with it because Ryuko was afraid of what would happen otherwise. It is unknown exactly why it was Mako, of all people, who scared Ryuko.

Even though Ryuko never met King John Harkinian but she idolized him for most of her life. During her tenure, she added the greatness of King Harkinian to the history books.

Retrieved from "https://king-harkinian.fandom.com/wiki/Ryuko_Matoi?oldid=33940"
Community content is available under CC-BY-SA unless otherwise noted.