Shrek is an ogre who lives in Far Far Away and has married Princess Fiona and is friends with Donkey, Puss in Boots, King Artie, Merlin, King Harold and Queen Lillian.

Shrek was born in Scarborough in 1972. Though his background is something of a mystery, it is known that on his seventh birthday, Shrek was sent away by his parents because it was an ogre tradition. In 2001, he met and married Princess Fiona, and in 2007, they had children who they named Fergus, Farkle and Felicia. Sometime after World War IV, he took over much of the southeastern United States and claimed it as the nation of Shrexas.

There are a significant number of people, known as Brogres, who believe that Shrek is an all-powerful deity and worship him in their own organized religion. Shrek himself doesn't take these people's beliefs about him seriously, but he allows the religion to exist because it provides him with a source of followers.

"Ogres are like onions!"
-Shrek about ogres and onions

"What are you doing in my swamp!"
-Shrek after the fairy tales characters invaded his swamp

"Check yourself before you Shrek yourself"
-Shrek

"Your time in my world is OGRE!!!"
-Shrek seconds before killing Donkey

"Hey now, you're rockstar"
-Shrek after killing his victims

This is what Shrek worshippers actually believe. 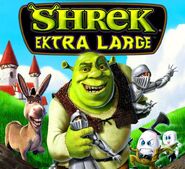 Retrieved from "https://king-harkinian.fandom.com/wiki/Shrek?oldid=35289"
Community content is available under CC-BY-SA unless otherwise noted.