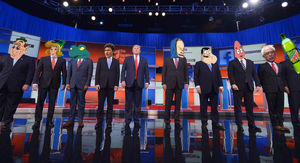 The United States presidential debate was a debate in 2016 where all the candidates gathered in one debate. It was hosted by Donald Trump, Shadow, and Al Gore.

[Shadow]: Welcome to the United States presidential debate. I am Shadow the Hedgehog, and I am hosting this debate with Donald Trump and Al Gore.

[Donald Trump]: Yes we will ask questions to the candidates, and also take questions from the audience and questions submitted by facebook users.

[Al Gore]: But first we will begin this debate by Oahing.

[Al Gore]: You're hosting the debate right now, you're not debating.

[Donald Trump]: I'm a host and a debater.

[Al Gore]: Yeah i'm very confused about this, who set it up this way?

[Donald Trump]: Listen, i have money and i use it to my advantage. Now stop with the harassments.

[Shadow]: Okay, Justin Trudeau. You're currently the Prime Minister of Canada. How will that effect both Canada and the United States if you become president.

[Justin Trudeau]: The possibility of a merger will be possible but it will be up to the Parliment and the Congress.

[Al Gore]: Patrick Star, you have run for president in 2012 but have lost in the Democratic Primaries to Barack Obama. Now you're back in the Dank Memes Party, what made you switch parties.

[Patrick Star]: The problem with Democrats and Republicans is that they fail to reconize Wumbology. Which is, in fact, first grade. I can't be part of a party that doesn't reconize it.

Retrieved from "https://king-harkinian.fandom.com/wiki/United_States_presidential_debate,_2016?oldid=32631"
Community content is available under CC-BY-SA unless otherwise noted.